The 18th General body conference of our Association was held at VCS RANGAN MEMORIAL HALL in Kanthimathi Mandapam, T.Nagar, Chennai.17, on Sunday, the 10th Nov 2013.The venue exquisitely decorated has filled with enthusiastic officers, who had come from different parts of the state, even before the commencement of the meeting. The august gathering had the gracious presence of the retired office bearers of our Association, EC members of our Federation and large number of lady officers were the source of great attraction. The programme was set in motion with a heart stirring, melodious invocation song by Ms.Akshya D/o of Sri.S.Sankar, DGS of our Association.


Sri.A.R.Saifullah, GS of our Association welcomed the guests and other participants & spoke about the growth and position of the unit and the problems being faced by the officers in the regions.


The conference was inaugurated by Sri.M.Elangovan, Field General Manager of our Chennai Zone by lighting the traditional lamp. Sri.Elangovan, deliberated in detail about the present position of our Bank, the performance & growth of the Bank and the short term strategy to be implemented focusing on the recovery in stressed assets, mobilization of low cost deposits and concentration on lending on retail & priority sector credit. He expressed his confidence in achieving all goals set before the bank with the active co-operation of the Association & its members.


Sri.K.Anandakumar, GS of Indian Overseas Bank officers’ Association & Senior vice President of AIBOC spoke on the issues to be tackled during ensuing bipartite settlements. Sri.D.Doraisamy, former President of our Association dealt at length about the growth of our unit in the last 30 years and appealed to the officers to strengthen the Association. Sri.B.Vijayaraghavan, President of our Association, laid down his office on 31st Oct 2013 as a sequel to his superannuation from the services of the Bank, highlighted the role played by our yesteryear leaders in attaining the majority status of our Association. Sri. Franco Rajender Dev, GS of SBIOA of Chennai circle & Treasurer of AIBOC, while addressing the gathering, narrated the present crisis in SBI as well as the role played by their organization for the reestablishment of the Trade union rights in SBI ,thro’ judicial intervention.


Sri.Harvinder Singh, General Secretary of AIBOC addressed the gathering amidst thunderous applause and the militant slogans AIBOC-ZINDABAD, OFFICERS’ UNITY-ZINDABAD. Sri.Harvinder Singh gave detailed account of the wage revision talks & informed the house that the IBA/the Government were not serious enough to decide the wage revision settlement which had become due since Nov-2012.


He also touched upon the residual issues like compassionate appointment, Five day week and restricted working hours for the officers. He exhorted all the officers to keep ready for struggle in case Government/IBA does not offer a respectable settlement. The entire participants gave him a standing ovation, when he concluded.


After the lunch break, the business session commenced. Your GS presented an exhaustive report covering the current scenario in the banking industry. The audited accounts of Association for 2010 to 2012 were also presented. The house approved the report as well as the audited accounts.


Sri.B.Vijayaraghavan was felicitated for the invaluable contributions made by him for strengthening the trade union movement particularly in our unit. The house also place on record the unstinted co-operation and support extended by his family members. Some of our activists also spoke about his involvement and commitment to our Association. The entire house wished him Serenity, Good Health and Prosperity. Retired office bearers S/Sri.I.Albert,S.Govindarajulu,K.Mohan,K.Eswaran,A.R.Swaminathan,KVS.Narayanan and C.K.vaidyanathan & others were felicitated.


The house thereafter elected the team of Office bearers and the Managing Committee members for the new team, the details are as under.


Friends, the conference were a grand event which has added another golden chapter in the history of our Association. Let all of us use our best efforts to make our Association/Federation, the only Officers organization in our state/Bank.

GREETINGS TO YOU ALL

LONG LIVE OUR UNITY
Posted by CBOA TAMIL NADU at 9:14 AM No comments:

Posted by CBOA TAMIL NADU at 9:19 AM No comments: 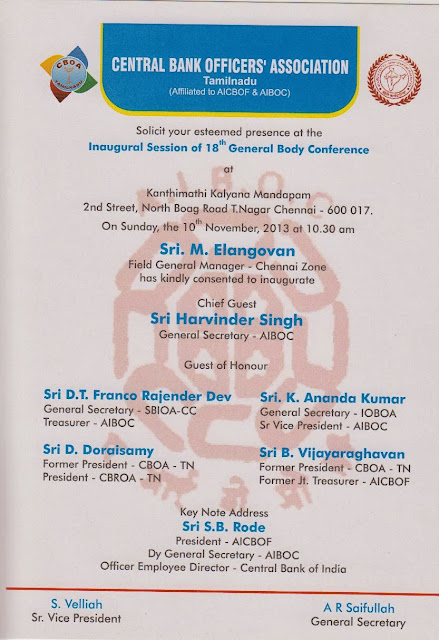 Posted by CBOA TAMIL NADU at 11:37 PM No comments:

TO: ALL OUR MEMBERS

As communicated earlier, arrangements are in full swing for the General Body Conference scheduled at Chennai on the 10th Nov., 2013. Shri. Harvinder Singh, General secretary of AIBOC shall be the Chief Guest and our esteemed Field General Manager, Shri.M.Elangovan has kindly consented to inaugurate. Other AIBOC leaders and our former leaders shall address the gathering. Shri. S.B.Rode, our Federation President, shall deliver key note address.  The GBC shall form the right forum to know the latest developments in the Industry & our Bank and on the ongoing wage settlement negotiations; apart from taking stock of our associations’ growth and activities. Travel arrangements are being coordinated by the respective Regional Secretaries. All members are once again requested to participate in the conference without fail.

Shri.B.Vijayarghavan,has retired from Bank service on 31st Oct., 2013 on his attaining the age of superannuation and laid down the Office of President of Association. He had a very long association with the organization and its activities, holding various key positions during his tenure. Accordingly, it is proposed to felicitate him during the GBC in a fitting manner.

Members are once again requested to send the conference levy to their respective Regional secretaries as per our earlier communications, if not sent so far.  Please make the Conference a grand success.

“WE WISH YOU AND YOUR FAMILY MEMBERS A VERY HAPPY DEEPAVALI” 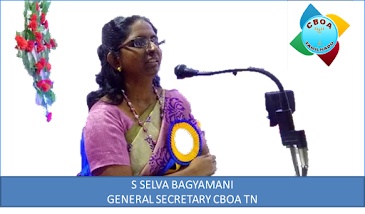 CBOA TAMIL NADU
Flat 806, Door No:210 8th Floor, A Block, Shivalaya Building, Ethiraj Salai, Commander in Chief Road, Egmore, Chennai-600 008, Tamil Nadu, India
Central Bank Officers' Association, Tamil Nadu is the representative body of the Officers working in Central Bank of India, in the State of Tamil Nadu & Pondicherry and is affiliated with All India Central Bank Officers' Federation (A.I.C.B.O.F.), the recognised Majority Organisation representing Officers of Central Bank of India. A.I.C.B.O.F. is affiliated with All India Bank Officers' Confederation (A.I.B.O.C., which is the largest Representative Body in Supervisory Cadre in the World.